A CASTLE THAT LIVES WITH ITS TIME, ALWAYS INHABITED FOR NEAR TWO CENTURIES

When we discovered the castle of La Rozelle in July 2010, we were not even close to imagine the adventures he had lived for almost two centuries.

We met the descendants of former owners, consulted the departmental archives, we met professionals involved in the redesigned work and garden specialists. We gradually understood both how we lived here and the events that marked the site.
Its secret: a castle still inhabited by “invested” owners, happy to live there, admiring its elegance and conscious of its comfort.

That is how from its origin until today, the castle of La Rozelle lives with its time, crosses the different ages and adapts to its environment.

We can notice 4 periods:

At the seventeenth and eighteenth century, some notables of Blois who had a house in town bought in the countryside a closed farmhouse with walls, “a closerie”, which assured them the refueling of fresh products such as fruits, vegetables and meat.

At the nineteenth century, these modest houses have been transformed into large houses.

On the grounds of La Rozelle, was built in the seventeenth century, a modest walled house. The first trace that we found is Mr. FAUCHER, first owner.

Several owners succeed each other until October 24, 1828. On that date, Mr. BLANCHET sells the closerie to Mr. Abel HEME and his wife. Mr. HEME is a judge in the court of Blois. He is the son of a wealthy wine merchant based in Mer, a city located between Orléans and Blois. M and Mme HEME build the vast house of La Rozelle by buying land nearby. It is at this time a large family home as can be seen in the photos of this time with the south turret and a single floor.

On November 8, 1837, the HEME family sold to Mr. BERTHIER Edouard, Napoleon, Charles, Count, son of Major General Berthier and grand-nephew of Louis Alexandre Berthier, one of the faithful Marshals of Empire of Napoleon I who made him Prince Wagram.

Then, from July 7, 1846 to June 9, 1883: the owner is Jean-Baptiste BEUNAICHE of the CORBIERES, doctor of medicine. He wrote a treatise on “the cold” and contributed to the prosperity of Cellettes, for which he financed the village’s first wash-house, and contributed to the construction of the presbytery. President of the Russy forest hunting company, Mr. BEUNAICHE de la CORBIERES, with one of his friends, Eugène de BELLAING, offered a stained glass window at the church of Cellettes, representing the conversion of Saint Hubert. He is a benefactor of the village. He died without descendants on June 17, 1879, and his wife from Hamburg sold La Rozelle in 1883 and left to finish her days in Germany. 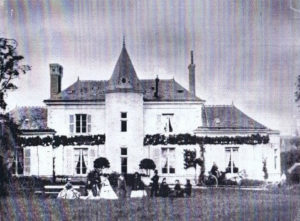 France is a world power and a true international reference in economic and cultural matters. Paris saw its architectural revolution with the opening of large avenues, artificial parks such as the park Buttes Chaumont, sanitation of the capital. Baron Haussmann builds large buildings. This is the time of the Universal Exhibition, the construction of the Eiffel Tower, the Grand and Petit Palais. In the provinces, we follow the movement.

From June 9th, 1883 to 1901: Mrs. de POTHUAULT, daughter of the chatelain of Chitenay and her husband Henri COLLINET of LA SALLE, captain 10th Cuirassiers of Versailles become owners and have the increased height done in 1888. Rozelle. Madame de POTHUAULT died on June 7th, 1899; the castle is sold shortly after.

Jean CHATILLON, banker in Paris acquires La Rozelle for the relaxation and the pleasure of his family. During the Second World War, between 1940 and 1944, La Rozelle, due to its strategic position on the main road to the south of France, was requisitioned several times by the German occupation army. After the war, his son Louis Claude took over the property where he lived in the summer with his large family. 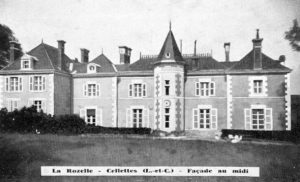 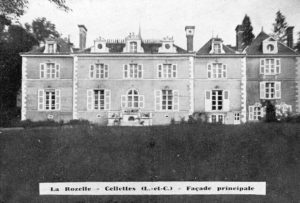 Then in 1989, the castle is sold to Mrs. Minako IMADA rich Japanese, passionate about French royalty. She creates a training school “with good French manners” which opens in 1992. Destined to young girls from great Japanese families, they come for a stay of three weeks and learn about French culture: gastronomy, wine, table linen, dishes, etc. During this period, a renowned restaurant, located in the winter garden, welcomes a wide audience of gourmets.

Then in 2007, the castle is sold to a company and remains closed, with no activity until 2010. 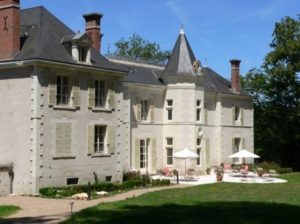 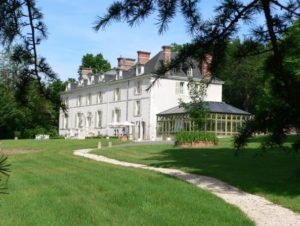 March 22, 2011 Nadine and Patrick BROCAULT bought the castle to live there and created a charming hotel that opened on June 11, 2011 with 8 rooms. Then after a second installment of renovation at the end of 2011- beginning of 2012, the works finished, the castle is reopened with 15 rooms.

In 2015, they decided to expand to meet the growing demand of international customers. Their choice is to build an extension, in the spirit of that which was built in 1890. There are 7 new rooms that open in 2016. The comfort is improved with an elevator that facilitates access to the floors. An overflow spa adds to the well being of the residents.

In 2020, 3 new rooms opened at the third floor of the extension.